Dry lock configuration does not lock/unlock as expected

Written by Aashrai Puthran
Updated over a week ago

This article covers the issue where a lock stays continuously unlocked where an access power controller powers the lock. The power controller's inputs require a normally open connection. This same issue could be seen with a power controller whose inputs are normally closed, but in that case, the lock would remain continually locked. In that instance, you would see the opposite results in the troubleshooting steps. The solution is the same in both cases, connecting an isolator relay between the AC41 and the power controller.

We first checked the door’s access history in Command and could see the door was on a locked schedule. Next, we had to go to the physical wiring as the config would keep the door locked.

I asked the installer to go over their wiring. It was a standard dry setup for this lock. The AC41’s normally open (NO) and common (COM) ports connect to the inputs on an access power controller. The power controller supplies power to the maglock.

We thought the AC41's lock relay may not be working. We disconnected the wires from the AC41 to do some multimeter testing. We measured continuity across the NO and COM ports of the AC41’s cassette. The multimeter read open-loop (OL), as it should while the relay is in an un-triggered state. We pressed TRIGGER LOCK and the high-pitched hum told us the circuit was now continuous. This validated that the AC41 was functional.

We reconnected the AC41 to the access power controller (NO COM). Initially, the lock continued to stay locked as expected (as if the wires were not touching). Then we pressed the trigger lock button and heard the AC41 click the lock relay over. The power controller immediately unlocked the maglock as expected. However, the lock did not relock after the AC41 relay clicked and switched back.

We disconnected the AC41 and shifted the focus onto the access power controller. We still had the two wires hanging off of the access power controller’s inputs. We separated them and checked the lock state, locked - different from when we had the AC41 connected. When we touched them together, shorting the circuit, the lock unlocked. This test mirrored what the AC41 should be doing, and we saw a different result than with the AC41 attached.

From our tests, the AC41 has the lock relay open, but the power controller detects a closed circuit.

The AC41 is able to supply power to the lock relay as many installs use the AC41 to power the lock. Due to this, the lock relay doesn’t act like a pure switch in a dry configuration. This relay connects to the AC41's ground. This normally does not cause issues as the grounding of the AC41 and power controller match.

We connected an isolator relay between the AC41 and the access power controller. This separated the devices to keep electricity from flowing from one ground to the other. Immediately after installing this relay, the maglock began to function as expected.

Wiring of the AC41 cassette to the relay: 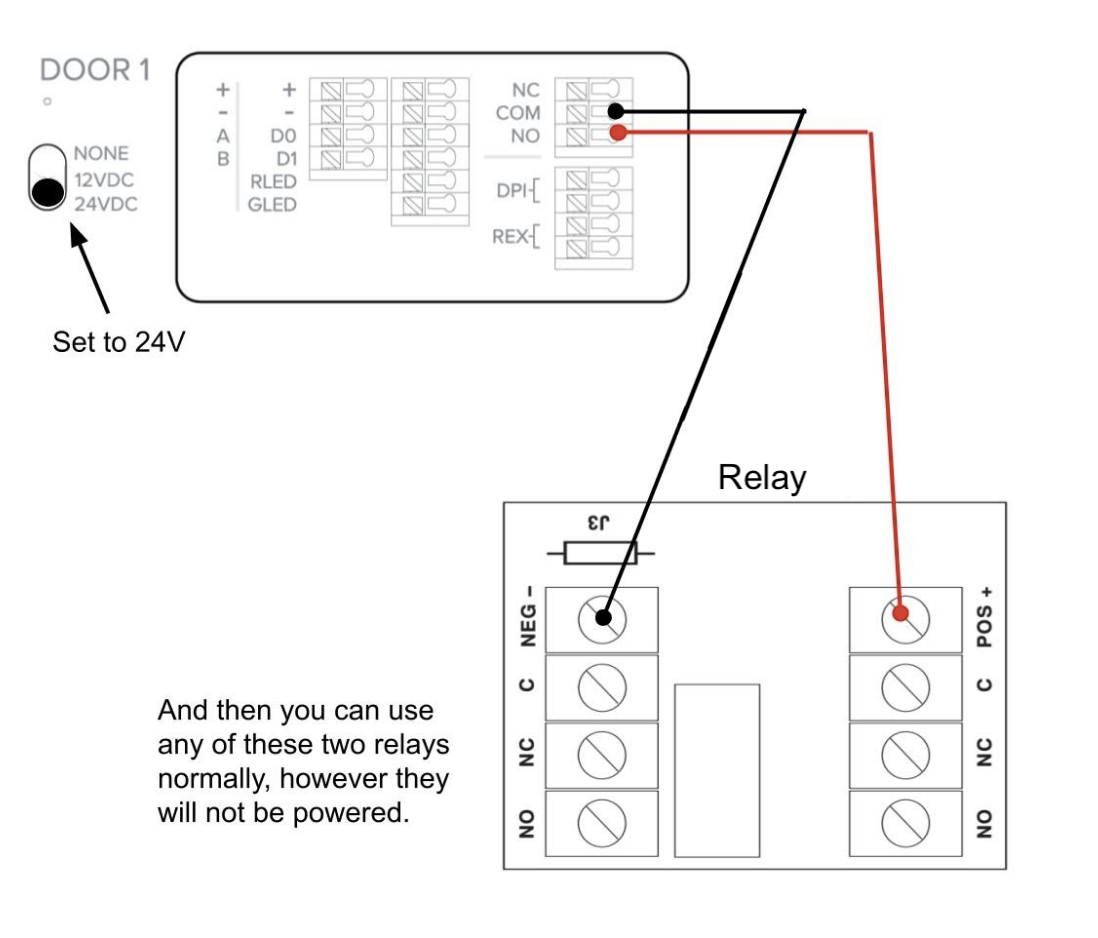 Diagram of the fix: