All Collections
Access Control
Configuration and Setup
What is the difference between OSDP and Wiegand?

What is the difference between OSDP and Wiegand?

Written by Jacob Dickson
Updated over a week ago

Wiegand and OSDP are technologies used in access control systems- including the access method (card, fob, etc.), reader, and controller.

When an access card of a Wiegand format (i.e. 26-bit, 37-bit, etc) is held near a compatible reader, the reader receives the information encoded on the card’s tiny integrated circuit. This is typically a facility code and a card serial number. This data on the card (a series of 1s and 0s) is permanently written onto the card and cannot be changed.

The reader then converts that series of 1s and 0s into electrical pulses per the Wiegand interface standard which is made up of 3 wires: a common ground, DATA0 (aka Data Low) and DATA1 (aka Data High). In order to send the 1s and 0s to the controller, the reader will drop the voltage on the respective DATA wire in rapid succession; 1s over DATA1 and 0s over DATA0. The controller detects these changes in voltage and reinterprets them as 1s and 0s in the firmware.

As described by the Security Industry Association (SIA), “Open Supervised Device Protocol (OSDP) is an access control communications standard developed by the [SIA] to improve interoperability among access control and security products.” While OSDP has been under development for some time, it was just published as an IEC standard in July of 2020.

Note: The Verkada AC41 currently only supports the Verkada readers when using OSDP.

What is the difference?

Verkada Support for Wiegand and OSDP 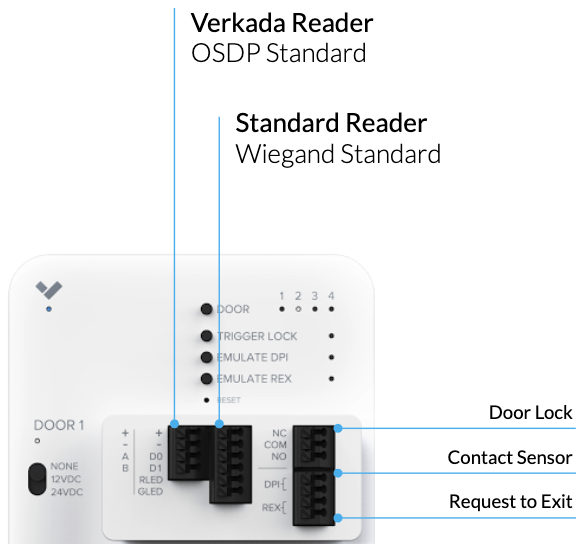 Visit Training Center for bite-sized video tutorials on how to accomplish role-based tasks in Command.